How I think about conflicts

When thinking about most conflicts, large or small, I find myself mentally organizing people’s responses to the conflict into particular rungs within this ladder (a personal model adapted from the work of the Arbinger 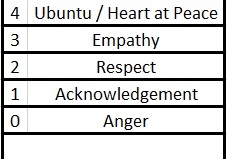 Institute, Sustained Dialogue, and other sources)….

The other side is cruel, evil, inhuman, immoral, irrational, ignorant, etc. and may be terrorists bent on the destruction of something I hold dear (literally in some situations, figuratively in others).

I acknowledge that the other side may feel just as firmly about its beliefs on this issue as I do about my beliefs.

I don’t agree with the other side’s view, but I realize that this view exists and that the other side disagrees with me for reasons that IT thinks are valid (even if I don’t think those reasons are valid).

I acknowledge that while they and I may have some fundamental disagreements on the issue at hand, I do, in fact, have some things in common with the people on the other side and may even agree with them on some (possibly small) aspects of the issue.

I believe that (at least most of) the people on the other side are good people, though I may disagree strongly with them.

While I firmly maintain my own identity and my beliefs that my own views on the issue are correct, I acknowledge that people on the other side may have different views that may also be correct, even if those views seem to be in conflict.

It is always valuable to be intentional about exploring for the good on the other side.

This ladder rung is best defined by MLK, Nelson Mandela, and Anne Frank:

“When you rise to the level of love, of its great beauty and power, you seek only to defeat evil systems. Individuals who happen to be caught up in that system, you love, but you seek to defeat the system.” — MLK, Jr. (11/17/57).

“For to be free is not merely to cast off one’s chains, but to live in a way that respects and enhances the freedom of others.” — Nelson Mandela

“Our human compassion binds us the one to the other–not in pity or patronizingly, but as human beings who have learned how to turn our common suffering into hope for the future.” — Nelson Mandela

For each conflict you thought of, at what level of the ladder is your current thinking? Do you want to move to a different level? Why or why not?

8 Responses to How I think about conflicts